The Cretaceous Period for Kids

Looking for information about the Cretaceous Era?  Let's start with a  list of the cretaceous dinosaurs.

Find out about which dinosaurs were around in this amazing period of time!

The Cretaceous Period was an amazing time in history when the Earth's climate changed.

The Cretaceous was the last period in which dinosaurs walked the planet. But there was still an amazing variety of dinosaurs around. 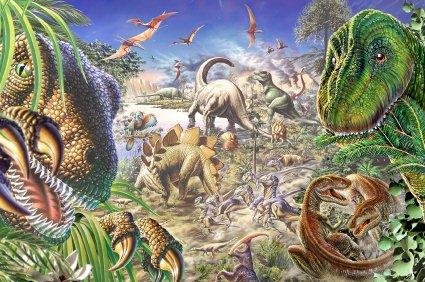 So what are the common dinosaurs that lived during this time?


At this time in history, many new plants and flowers appeared. This helped many of the plant eating dinosaurs to flourish, but some did not. For example, the Stegosaurus dinosaurs were replaced by armoured ankyosaurs - plant-eaters with heavy, bony clubs on their tails

What type of plants did they eat? Find out all about the Cretaceous Plants in their diet.


Omnivore Dinosaurs of the Cretaceous

Omnivore dinosaurs would have eaten both plants and meat - probably eggs, insects and smaller cretaceous animals. Also in this time was the dinosaur Oviraptor - but scientists do not know what this dinosaur ate.