What plants did dinosaurs eat in the Cretaceous period?

Want to know about Cretaceous plants?

Here is some information and pictures about the types of plants that would have been around during the Cretaceous period.

About Plants in the Cretaceous Period

During the Cretaceous period the earth began to have seasons, which meant colder winters and warmer summers. These changes in temperature meant lots of changes to the plant life of the time.

Some plants from the Jurassic period were still around, such as mosses, ferns, horsetails, cycads and conifers.

More and more flowering plants (angiosperms) now began to appear. They quickly spread and became the main ground covering. This evolution was helped by the new appearance of bees to pollinate the plants.

Some of the new flowers were

Some new trees also appeared at this time including oak, maple, walnut and beech trees. 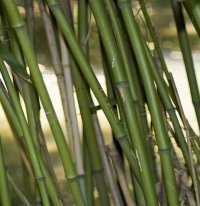 Scientist now also believe that an early type of grass (which we know as Poaceae or Bamboo) appeared around this time in the warmer climates of Asia.

This is a new discovery, as for a long time it was believed that grass came after the dinosaurs.

All of these new plants changed the landscape. Some of the plants that had been eaten by Cretaceous dinosaurs became scarce, but other dinosaurs thrived on the new variety of foodstuff.