Elasmosaurus was an amazing sea reptile.

Find out all about it. Pictures, diet facts, size and where it lived. And why it isn't a dinosaur? 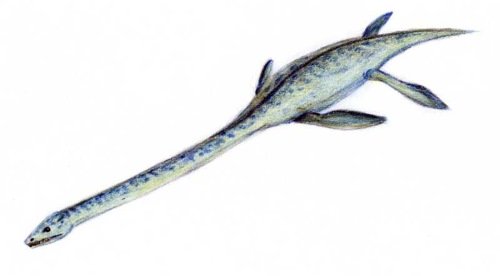 Like most of the so called 'swimming dinosaurs', Elasmosaurus wasn't really a dinosaur at all! It was a reptile.

It did breathe air. Their necks were so long they wouldn't have been able to lift more than its head above the water.

They lived during the Late Cretaceous period 80.5 million years ago. This is around the same time as lots of Cretaceous dinosaurs. 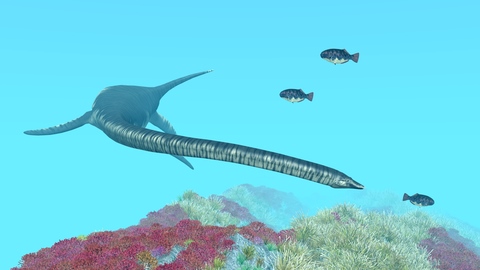 This was a slow swimming reptile. It had four paddles for swimmng that would have been rigid - perfect for swiming.  It is unlikely that it would have been able to move on land. Scientist think it may have given birth to its young in the water like sea snakes do today.

When Elasmosaurus was first discovered no-one had ever seen anything like it. So the scientist initially placed the head on the end of the tail instead of the neck!

It has no dinosaur classification as it was a Plesiosaur, which is a reptile. 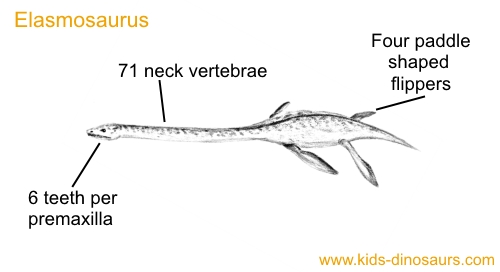 It would probably have hidden below a school of fish - and then slowly moved its head below its prey. It also had good eyesight for finding small prey.

It is the only plesiosaur to have six teeth per premaxilla - these are the bones at the tip of the snout. It also had 71 neck vertebrae.

It ate small bony fish, amonites (molluscs) and belemnites (similar to squid). It also ate small stones to help it digest its food, in the same way that crocodiles, seals and sea lions do today. 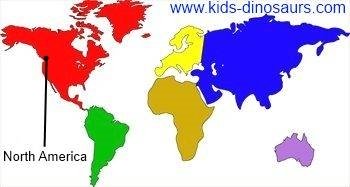 Fossils have been found in several places in North America.

Although in this picture the neck is bent to fit it in - it could only swim in the direction its head and neck were pointing in.