Why are Dinosaurs Extinct?

Are Dinosaurs extinct because of asteroids? Or volcanoes? Or just old age?

Find out the latest news on dinosaur extinction theories. 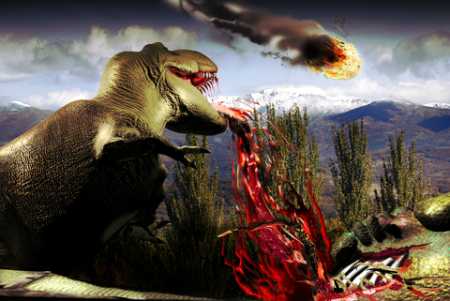 Dinosaur extinction happened about 65 million years ago and scientists have been arguing why it happened since that time!

There are many different theories about why it happened. And new research and studies are being done all the time.

So here are the latest news, research and theories about what caused dinosaurs to become extinct.

News on how Dinosaurs became Extinct

Scientists now think that the dinosaurs were already dying off before an asteroid impact. Otherwise they may have survived it.

Rising sea levels and an increase in volcanic activities had made many species more susceptible to extinction at just the time the asteroid struck.

It the asteroid had struck earlier, when the food chain was stronger, they might have survived it.

They are not sure whether the dinosaurs would have become extinct anyway if the asteroid had not hit.

Scientists from an international team have determined the most precise dateyet  for dinosoaur extinction.

A new study suggests that at least two asteroid hits to the Earth may have been responsible for why the dinosaurs became extinct.

A second crater discovered in Ukraine have now led scientists to think that the dinosaurs had a "double whammy" of asteroid hits, rather than just a single blow.

A panel of 41 experts has reviewed over 20years worth of research into dinosaur extinction, and published their findings in a Science Journal.

They decided that the best evidence pointed at the extinction being caused by the effects of a huge asteroid hitting Earth. The meteorite hit Yuktan and caused a crater over 180km in width.

They said that the effects from the asteroid would have caused an earth-wide winter and put the planet into darkness. They agreed that most animals would not have been able to adapt to this environment.

New ways of dating rocks and fossils have helped scientists at Berkeley to say more exactly when dinosaurs became extinct. They now believe the date of this period to be 65.95 million years ago.