Wanting to know about Dinosaur skeletons? These giant skeletons are how we know so much about dinosaurs today.

The first nearly complete skeleton of a dinosaur was discovered by William Parker Foulke in 1858. It was of a Hadrosaurus.

A complete skeleton will give a scientist a good idea of how big the dinosuar was, and what it looked like. The skull will be able to tell them what it ate and other things - such as claws, body plates and teeth will show how it defended itself - or attacked it's prey.

Mostly skeletons are discovered in the form of dinosaur fossils. When some of the bones are missing, experts can often guess what they were like by studying other complete fossils.

Just like your skeleton, the skeletons of dinos are made up lots of bones. Each bone type has its own name. Some dinosaur bones include: 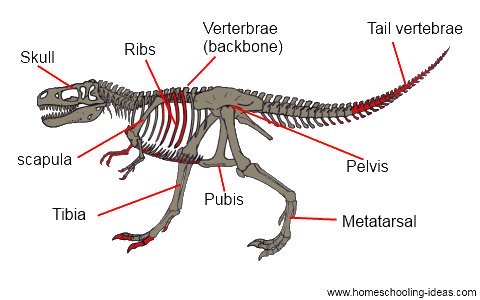 Different shaped dinosuars have different skeletal structures. Some dinosaurs (like the Tyrannosaurs rex and Allosaurus) had a second set of ribs called gastral ribs on the underside of it's body. Scientist think this was to help keep the body rigid.

Would you like to see more skeletons? Here are some pictures of skeleton dinosaurs.