Here are some ideas we have had from www.kids-dinosaurs.com readers!

I think that they ate a sharp thing and broke all their teeth so they couldn't eat, and so they starved to death. 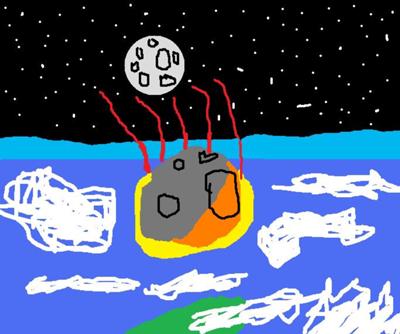 Now, the asteroid is SO close to Earth! It's now a little black dot. It breaks Earth's atmosphere and now is on fire. Dinosaurs sense the asteroid. Then, it SMASHES into the sea! Tidal waves wash the shallows. You now see a massive glow! Then, in the glow, a meteor strike gives way. They hit many places on the Earth's surface. Earth it infected. Dust goes into the air. Forest fires, dinos, and ruins are left behind. That might have happened.

Im not a scientist but i think that like a cat and kittens no one could touch or play with it a lot or the mom will eat the the kitten because the cat doesn't realize the smell of the kitten that the mom is used to. So i think that if the dinosaur mom goes out hunting and a different adult comes and takes care of the young one.Then that adult goes away and the real mom comes back doesn't realize the smell and eats the young. I think this happened to all of them so thats what makes them extinct.(:

Asteroids Did It by Grace B. (Newport)

What dinosaurs? by Anonymous

My theory is that dinosaurs never existed in the first place.

A combination by Chloe Eacott

I believe that a volcano erupted and it caused a big change in climate but that didnt finsh so then i think  a disease was in the water and a herbavore dinosaur drank from it then a carnivore ate that dinosaur so it then got the disease that is my theory but i expect other people has their own theory.

I think personally that dino's got cold blooded they eat every thing on the land and the only thing that was left was them so the started to eat each other to the bone and from then nothing was hear.

i belive a pretty princess came down on earth an waved her wand and made all the dinosaurs fall under her spell and she said die now and they all died and there is a family of fairey living there now.

Asteroid and volcano by Haley (NY)

The day the dinosaurs left

For my theroy i would like to it to be as scientific as can be because i am only 12....

Dinosaurs are the most fascnating thing that happened in earth Fossils of small mammals have been found from 65 million years ago. It is possible that these small cretaceous animals started to compete with dinosaurs, for example stealing and eating dinosaur eggs. However, no-one is sure whether mammals caused dinosaur extinction, or they thrived because dinosaurs were no longer around.

Dinosaurs are not extinct, they are just hidding. They are very small and are very good at hidding. 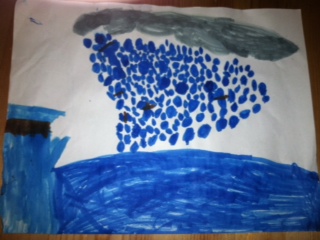 Long ago, very long ago, very, very long ago, there was a very horrible storm! It swooshed throughout the land. There was so much rain, it turned into a flood. Dinosaurs panicked and panicked, and they panicked!!! What should they do to keep cover from the storm? And then, the dinosaurs could not take cover from the flood. And so, that's the story of how dinosaurs got extinct. And, there are 999 rain drops in the picture.

Dinosaurs Get Frozen Because of the Ice Age by Beckett (Princeton, NJ) 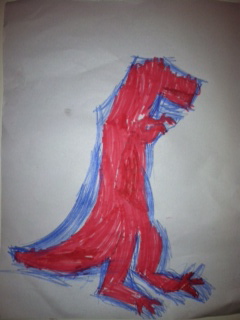 A long time ago, I think the ice age got all of the dinosaurs. That's how they became extinct.

The dinosaurs partied too hard and died from natural causes.

I think this is what happened and the dinosaurs could have become extinct because of this problem.

About 60 million years ago a comet crashed into all the oceans on earth.It drown all of the land dinos on earth as well as all the feathered(flying)dinos by wetting their wings and feathers.The comets killed all the big sea dinos.In my opinion, I think not all dinos are extinct but we have just gotten to know them too well to notice that they are dinos.

Maybe if a disease caused dino deaths, it was probably a poisonous plant growing in the area.  Because herbivores ate plants, they probably mistook that plant for something else.

After eating that,  the effects wouldn't be immediate. The  meat eaters like the T-rex's probably ate the herbivores, causing them to die from the effects also.

The scientific reason would conclude: whatever this plant is, it was very toxic!

Scientists all think that dinosaurs are extinct but what if they are not? What if they are still alive and moving? Statistics show that minors have complained about loud animal like calls during night times, no one has dared look but it is becoming more of a serious matter. A few days later  an employee selling the mines went in to look and never came out. His family and friends are still devastated of this news. What could be happening in there? Who is brave enough to look and also come out of the mines?

I believe that a [deadly] reptilian disease carried by ticks that fed on the same plants as herbivores caused dinos like triceratops and Diplodocus to die and the animals that fed on them died of mass starvation.

How did the dinosaurs die? by Kate (UK)

There is a Theory that aliens killed them so their type of people could take over.

Back to Dinosaur Extinction